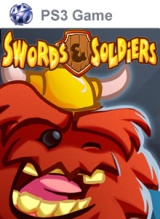 Total Trophies: 20Designed by the innovative game designers at Ronimo Games, Swords & Soldiers is a sidescrolling real time strategy game in which three distinct factions battle for the powers of the gods. The game will feature a single player campaign and a competitive splitscreen multiplayer mode as well as several other game modes.

RickRolled
Destroy the enemy castle with a boulder.

Cooking by the Book
Complete the Viking campaign.

Uncontrolled Demolition
Destroy a tower under construction with Rage.

Bull in a China shop
Cast a boulder that does not damage a single unit.

Son of Norris
Kill 36 units with a single unit.

Techno Viking Dances Away
Reach the maximum distance in a Berserker Run game.

At First I Was Afraid
Survive over 30 minutes in a Survival game.

King of the Stone Age
Kill all Vikings in a Boulder Mode game without killing any of your own.

Pity the Fool!
Survive Viking Campaign level 10 without the help of Mr. Thor.

Where are the Kangaroos?
Complete Viking Campaign level 4 by destroying the enemy base.

Fort Knox’d
Prevent the Giant in Aztec Campaign level 2 from reaching the Goldmine.